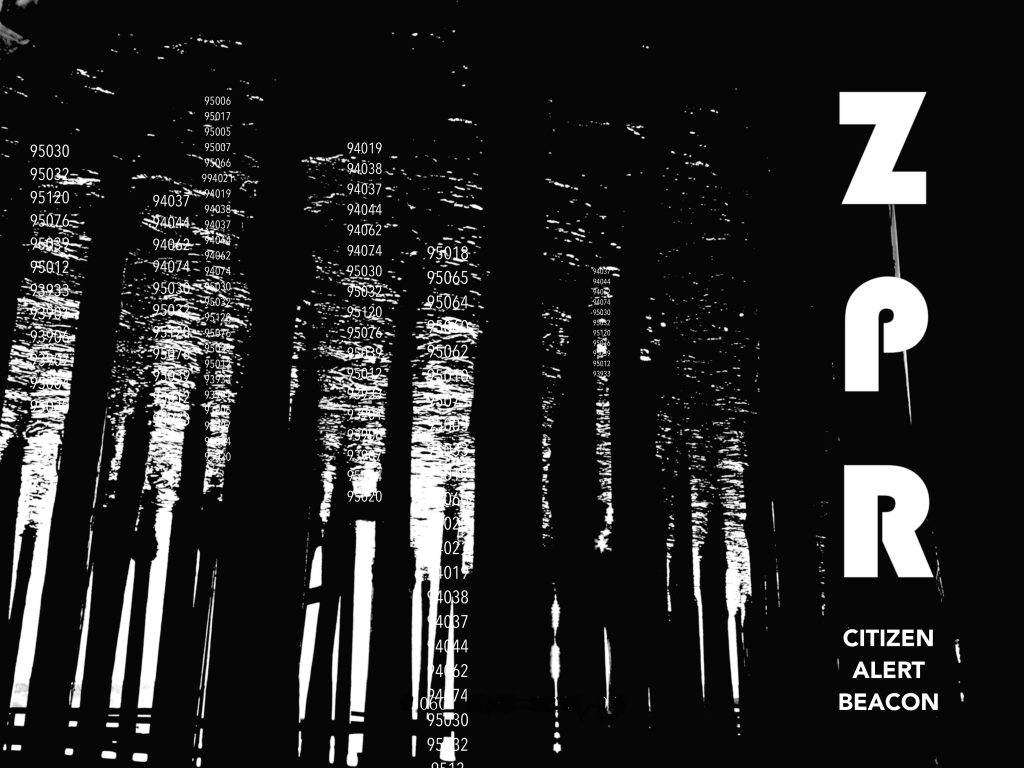 The Zipper is a beacon that warns of the command and control systems watching, listening to, and caching our transmissions. The Zipper cautions that encryption is necessary. The Zipper reminds us that sneaker waves (unexpectedly large waves within wave trains, which may sweep unsuspecting swimmers or beachgoers out to sea) are not always accidental.

Transmission is an act of sending across, of propagating signals between two or more locations. Broadcasts in the electro-magnetic spectrum describe distance, message, position, and relationship between points. Transmissions may be imperceptible to the human senses without articulation by technology—radio waves are electro-magnetic and must be transduced into sound and/or light waves in order for people to perceive the message or information they carry. A radio wave may be broadcast across vast geographical territories or confined to narrow areas of reception, depending on the strength of the signal and the position of the antenna relative to other material and geographical factors. Radio may be described as a paradoxical coupling of instantaneous liveness or intimacy, and the knowledge that the signal has traversed a distance, however small or large.

Radio has a history of pelagic metaphors, perhaps owing to the early naval adoption of the technology, or perhaps because of the social perception that wireless communications opened up a new world of electronic immersion: “Oceanic metaphors proved versatile in capturing the seeming omnipresence, unfathomable depths, and invisible mysteries of both radio’s ether and its audience—mammoth fluid bodies that, like the sea, were ultimately boundless and unknowable.”1 An audible radio signal picked out of an ocean of static serves as a beacon, a lighthouse, a weather station, a warning: here be rocks, here be shallows, here be treacherous tides. A signal anyone might hear, but which has also been designed for a specific listener.

The group ENIGMA 2000 consists of committed amateur shortwave enthusiasts, who track the existence and demise of all known “numbers stations”—stations which broadcast coded messages on shortwave frequencies to foreign intelligence operatives internationally. Each station is precisely classified based on language spoken and variants overheard. Some stations acquire nicknames, especially those that consist mainly of polytones or a consistent noise (“The Russian Woodpecker”, “The Buzzer”). Many stations feature voice synthesis, while others still use a recording of a human reading sequences of seemingly random numbers thought to contain encrypted messages or instructions intended for spies working undercover. A numbers station is a beacon to someone working abroad: an uncrackable, private channel from home utterly unconcerned by the promiscuous traces it leaves.

Individually, denizens of the U.S. engage in thousands of data transmissions each day over wired and wireless platforms. Each keyboard click, IP address, and cookie crumb, each packet transported through the pervasive infrastructure of the Internet or wireless telephony may be monitored, has been monitored, will be monitored. Since January 20, 2017, the new president and his appointed fellows in federal government are living up to the promise of greatly increasing citizen surveillance in the name of our collective security. In response, our interpersonal communications could learn from numbers stations and become transparent yet uncrackable, eccentric, intimate, public and unafraid.

The mammoth fluid body of the wireless ocean contains many creatures and accumulations of forces likely to act obliquely but powerfully. The Zipper narrowcasts on radio along the coast of Northern California from January 20, 2017 until further notice.

Anna Friz began making radio as a volunteer programmer on campus/community radio CiTR Vancouver, Canada in 1993. Since then she has created audio art and radiophonic works for extensive international broadcast, installation, or performance in more than 30 countries, where radio is the source, subject, and medium of the work. She also composes multi-channel atmospheric sound works for theatre, dance, film installation, and solo performance that are equally able to reflect upon public media culture or to reveal political and interior landscapes. Anna holds a Ph.D. in Communication and Culture from York University, Toronto and is Assistant Professor of Sound in the Film and Digital Media Department of University of California, Santa Cruz. She is a steering member of the artist collective Skálar | Sound Art | Experimental Music based in East Iceland and a long time affiliate artist of Wave Farm in Acra, New York. Anna is an itinerant member of the Toronto-based art collective Public Studio, which together recently completed a City of Toronto commission for a new permanent public sound installation 120 Mirrors in the Lee Lifeson Arts Park in Toronto. In 2016 she was a co-curator of the Radio Revolten International Radio Art Festival in Halle (Saale) Germany.