Pepe the Chill Hate Symbol: On the Meaning of Memes — aCCeSsions

Lauren Duca
Pepe the Chill Hate Symbol: On the Meaning of Memes 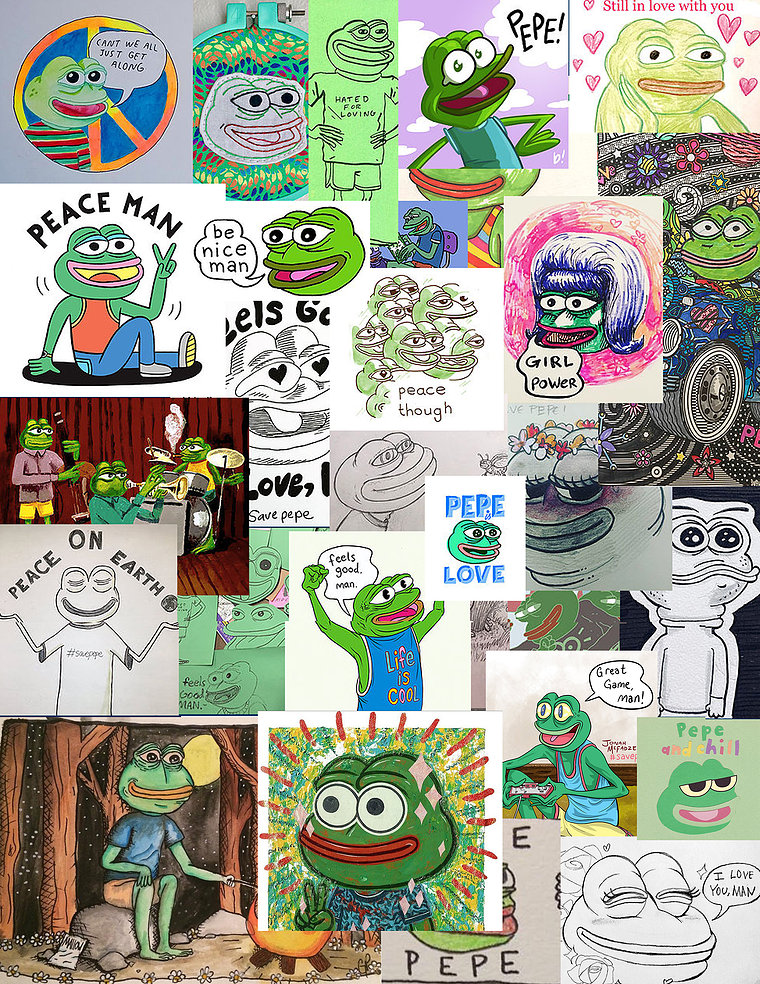 A collage of peaceful Pepes from the Anti-Defamation League’s #savepepe campaign. http://www.neverisnow.org/savepepe

Pepe the frog was just a cartoon—or anyway, that’s all he was intended to be. Creator Matt Furie drew Pepe’s squinty yet bulbous eyes over a rippling grin in 2005 as a character in a comic book called Boys’ Club. He could never have anticipated that Pepe would go on to become one of the Internet’s first memes, being posted and reposted across 4chan, Tumblr, and Katy Perry’s Twitter account; or that the Anti-Defamation League (ADL) would one day declare Pepe a hate symbol.

To explain how all of this came to be requires an explanation of Pepe the meme, but getting a firm grasp on Pepe is tricky business—as slippery as if he were a real frog. Pepe, like many memes, is a Rorschach test for the id. Even before being weaponized by neo-nazis, he encapsulated a broad spectrum of meaning. Borrowing his image as an innocent reaction meme is a highly personalized act built out of ambiguity, and the way he was able to be co-opted by racist groups is an extension of that equivocality.

The subject of a meme often acts as a blank slate for an individual’s projection, and Pepe is an especially tenebrous example of that. Even his general vibe is unclear: Is he experiencing pleasure? Malice? Some twisted combination of the two? The expression on his face was open to interpretation long before he came to be accompanied by Nazi propaganda. It took a concerted effort to transform Pepe into a tool for expressing hate, and it will take a concerted effort to win him back, although, given the dynamism of meaning on the Internet, Furie and the (ADL) have determined that it’s a battle worth fighting. Together, they have launched a campaign which aims to spread peaceful Pepes as a means of reclaiming the image from its hateful abusers. It’s an initiative based on the idea that sharing innocent images will shift the perception of Pepe’s presence, bring the contentiousness of his hateful use to light, and rob the image of its sinister power as a dog whistle.

In November, the ADL hosted their Never Is Now summit. The event hosted a diverse range of tech leaders, writers, historians, and activists interested in combatting anti-Semitism, and Furie was invited to speak. During a talk marketed as an attempt to “#SavePepe,” Furie briefly addressed the audience to explain his experience with Pepe’s transformation, and to insist on the frog’s innocence. Wearing a short sleeve button-up covered in Pepes, he gripped the mic and explained that Pepe is a “chill frog” who “smokes plants.”

The transformation of Pepe prompts the question of authorial intent. Furie felt that the frog had transcended his ownership long before he ever saw the drawing accompanied by a swastika. In fact, he didn’t even know what a “meme” was until Pepe became one circa 2008, and he didn’t know that the meme was being used as a hate symbol until September 9th, 2016,1 when he received more than 20 emails noting that Hillary Clinton had announced that Pepe was being used by white supremacists. Not long afterwards, the ADL announced Pepe’s new status in their database.

“The Pepe the Frog character did not originally have racist or anti-Semitic connotations,” the entry reads. “Internet users appropriated the character and turned him into a meme, placing the frog in a variety of circumstances and saying many different things […]. [A]s the meme proliferated in on-line venues […] a subset of Pepe memes would come into existence that centered on racist, anti-Semitic or other bigoted themes.”2

The listing goes on to mention the “alt-right” as the group responsible for Pepe’s updated status, and Furie as his original creator—a reference he asked them to remove. The ADL was understanding, and pulled Furie’s name from the post, though he was later added back in after he teamed up with the organization.

At the panel that opened the campaign, Furie encouraged the crowd to tweet peaceful Pepes along with the hashtag #SavePepe, in the hope that pumping non-racist frogs through social media would rob the cartoon of its hateful power. Typically, though, virality cannot be manufactured. Major publications and influencers can propel an idea closer to the viral stratosphere, but strategy is far weaker than the organic forces of likes and shares. It’s nearly impossible to force something to go viral, although Pepe didn’t become a hate symbol by accident; he was systematically appropriated by the “alt-right” in an extended effort to weaponize the image’s meaning.

“With the growth of the ‘alt-right’ segment of the white supremacist movement,” the ADL explains, “the number of ‘alt-right’ Pepe memes has grown, a tendency exacerbated by the controversial and contentious 2016 presidential election.”

In October, the “alt-right” was defined in the New Yorker as a “loose online affiliation of white nationalists, neo-monarchists, masculinists, conspiracists, belligerent nihilists, and social-media trolls.”3 However an easier way to understand them is via their tactics. The alt-right has militarized social media strategies by using guerilla warfare to spread their messages through an intricate system of dissemination. Pepe is but one of their schemes.

Consider the work of Mike Cernovich described in the aforementioned New Yorker piece, entitled “Trolls for Trump,” which doubles as a profile of the alt-right leader and his self-described machinations. Throughout the election, Cernovich would host Periscopes for his tens of thousands of Twitter followers, announcing which anti-Clinton stories to spread and which hashtags to use when spreading them. He is also credited with promoting the falsified narrative of Clinton’s ailing health.

“There are a million things wrong with Hillary,” Cernovich told writer Andrew Marantz. “But I was looking at the conversation online—what was getting through to people and what wasn’t—and none of that was sticking. It’s too complex. I thought that the health stuff would be more visceral, more resonant from a persuasion standpoint, and so I pushed that.” He specifically zeroed in on Clinton’s supposed illness, and led an effort to propel her fabricated physical weakness all the way to broadcast media chyrons, without a shred of truth to back it up.

The sinister use of Pepe is similarly strategic. By accompanying something as innocent as a cartoon frog with burning crosses and swastikas, Pepe was morphed into an echo of those white supremacist hate symbols that frequently accompanied his image, but with the added benefit of plausible deniability. For example, when then-Republican candidate Donald Trump tweeted images of Pepe in fall of 2016,4 it was considered a nod to white supremacist groups, not unlike the photo of Clinton imposed on piles of money along with a six-point star in July. Although Trump claimed that the latter was a “sheriff’s star” or “regular star,” the image obviously invoked anti-Semitism, and it was easy to call out, because there is a concrete history of genocide associated with the Star of David. Not so much with a cartoon frog. Using an instance of the meme without recognizable hate symbols, Trump managed to signal allegiance to the alt-right while maintaining the ability to plead ignorance. Pepe the frog is an exquisitely crafted dog whistle, indeed.

It was not long after Trump and his sons began sharing images of Pepe—including a repost of Pepe rendered in Trump’s image—that the ADL updated their database. Various members of the alt-right have since issued gloating statements claiming that they deliberately fabricated the white supremacist associations of Pepe. As one self-professed member of the group told Daily Beast reporter Olivia Nuzzi, “We basically mixed Pepe in with Nazi propaganda, etc. We built that association.”5

Proudly taking credit for Pepe’s transformation raises the issue of Poe’s law: an adage on the indistinguishability of extreme views from parodies of them, especially in a religious or political context. The concept derives from a comment posted by a man named Nathan Poe on the website Christian Forums in August 2005: “Without a winking smiley or other blatant display of humor,” he wrote, “it is [utterly] impossible to parody a Creationist in such a way that someone won’t mistake for the genuine article.”6

The earnest commentary blended with the irreverent mockery, because both were similarly absurd. It would seem that some of the ushers in Pepe’s despicable journey are driven by an irreverent drive toward chaos and self-amusement. So, did attaching him to burning crosses and Swastikas begin as a malicious joke? Either way, does it matter?

The sincere and satirical uses of hateful Pepes have blurred beyond comprehension, though the motivation behind sharing the image is irrelevant to the holistic cultural processing of Pepe as a symbol. Here the issue of authorial intent has metastasized into a more wily version of the original question, though the answer remains simple: No individual can dictate meaning.

“Once something becomes a meme, it becomes something that belongs to the Internet,” Furie told me after his Never Is Now talk. “I’m not like ‘I want my frog back.’ I can’t get it back.”

He meant that in terms of Pepe becoming a meme, but it’s true no matter how Pepe is used, even for the man who created him.

Meaning is embedded in our cultural infrastructure. It requires common usage and tacit agreement. Pepe’s hate symbol status wasn’t debunked because Furie came forward saying he is meant to be a “chill frog,” and Pepe isn’t any less connected to racism because several individuals are claiming to have fabricated the current perception of him.

The alt-right deliberately combined Pepe with hate symbols so that they could signal to one another while mocking those who called out the link. This effort to destabilize the basis of progressive concerns is textbook gas-lighting. And yet, for those feeling such concerns, perhaps there is something to be learned from the strategy.

The #SavePepe campaign is just as inorganic as the less formal campaign to destroy Pepe, and it’s equally powerful. While Pepe may continue to be rendered alongside various racist paraphernalia, Furie and the ADL have regained control over the so-called peaceful Pepes. If Pepe is shared in his original form now, it may be read as a nod either to the alt-right, or to the valiant effort to free him from their clutches.

As for the far less contentious question of his facial expression, there are many versions of Pepe, though the most iconic image is one that could be seen as either pure bliss or sinister smugness. What did Furie intend? He shrugs when asked, squinting his big eyes into an expression not unlike the one in his notorious drawing. “There are lots of Pepes,” Furie says. “The way I see it, he’s just a stoned frog.”

Lauren Duca is an award-winning and -losing freelance journalist. In addition to working as a contributing editor at Teen Vogue, her work can be found in / on Vice, New York magazine, the New Yorker, The New Inquiry, The Nation, Pacific Standard, Cosmopolitan, and Complex, among other publications. She’s mostly just trying to get you to follow her on Twitter (@laurenduca).