Deric Longden Oct 21, 2021 Deric Longden
50 amusing short stories for cat lovers by Emmy and BAFTA-winning author Deric Longden. Broadcaster and speaker, he has written many widely-acclaimed books The Cat Who Came in From the Cold, I’m a Stranger Here Myself, Enough to Make a Cat Laugh, A Play On Words and Paws In the Proceedings. Each demonstrate his unique blend of humour, observation and his fun and adventures with his various adoptive cats. Tailpieces is a special personal collection of his favourite short stories and articles on cats.Diana’s Story, published in 1989, some years after his wife Diana's death, was a bestseller. The book hit the Sunday Times best seller list straight away and won the NCR book award. It was followed by Lost for Words. They were adapted for television, the first under the title Wide-Eyed and Legless, and an adaptation of Lost for Words. Both were nominated for multiple BAFTAs and Lost For Words, screened in January 1999 and repeated in 2012 after the death of Pete Postlethwaite, attracted an audience of more than 12 million viewers and won the Emmy for best foreign drama and a BAFTA for Thora Hird as best actress. 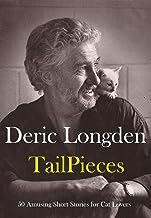